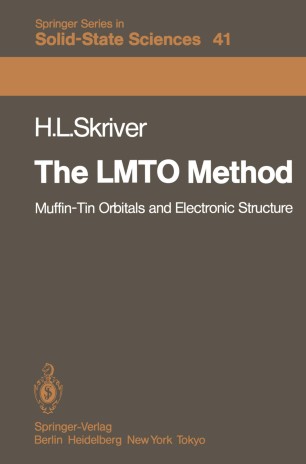 The simplifications of band-structure calculations which are now referred to as linear methods were introduced by Ole K. Andersen almost ten years ago. Since then these ideas have been taken up by several workers in the field and translated into computer programmes that generate the band structure of almost any material. As a result, running times on computers have been cut by orders of magnitude. One of the strong motivations behind the original proposal was a desire to give the conventional methods' a physically meaningful content which could be understood even by the non-specialist. Unfortunately, this aspect of lin­ ear methods seems to have been less well appreciated, and most workers are content to use the latter as efficient computational schemes. The present book is intended to give a reasonably complete description of one particular linear method, the Linear Muffin-Tin Orbital (LMTO) method, without losing sight of the physical content of the technique. It is also meant as a guide to the non-specialist who wants to perform band-structure calculations of his own, for example, to interpret experimental results. For this purpose the book contains a set of computer programmes which allow the user to perform full-scale self-consistent band-structure calculations by means of the LMTO method. In addition, it contains a listing of self-con­ sistent potential parameters which, for instance, may be used to generate the energy bands of metallic elements.