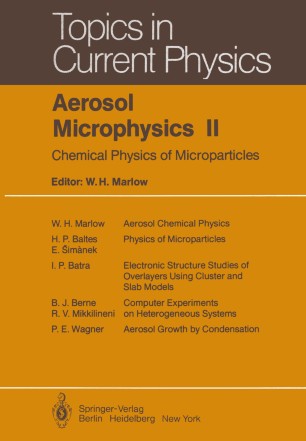 Aerosols, which are gas-phase dispersions of particulate matter, draw upon and con­ tribute to multidisciplinary work in technology and the natural sciences. As has been true throughout the history of science with other fields of interest whose un­ derlying disciplinary structure was either unclear or insufficiently well developed to contribute effectively to those fields, "aerosol science" has. developed its own methods and lore somewhat sequestered from the main lines of contemporary physical thought. Indeed, this independent development is the essential step in which syste­ matic or phenomenological descriptions are evolved with validity of sufficient gen­ erality to suggest the potential for development of a physically rigorous and gen­ eralizable body of knowledge. At the same time, the field has stimulated many ques­ tions which, limited to its own resources, are hopelessly beyond explanation. As Kuhn pointed out in The Structure of Scientific Revolution [2nd enlarged edition (University of Chicago Press, Chicago 1970) Chapter II and Postscript-1969) this is a very common juncture in the development of a science. In brief, the transition from this earlier stage to the mature stage of the science involves a general re­ cognition and agreement of what the foundations of the field consist of. By this critical step, a field settles upon a common language which is well defined rather than the ambiguous, and often undefined descriptors prevalent at the earlier stage.