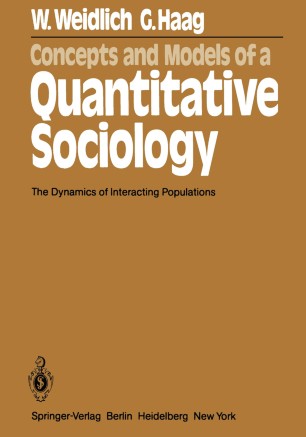 Concepts and Models of a Quantitative Sociology

The Dynamics of Interacting Populations

While the volumes hitherto published in the Springer Series in Synergetics have been devoted almost exclusively to the self-organized formation of structures in physics, chemistry and biology, the present monograph by Weidlich and Haag deals with the formation of "structures" (or "patterns") in society. At first glance it would seem a daring enterprise to deal with the complex processes in society using concepts and methods first developed in physics. But over the past decade it has been shown that there is a large class of phenomena in a variety of fields to which unifying concepts can be applied. This is particulary true of situations in which a system composed of many parts or individuals acquires a new structure on macroscopic scales. Indeed, this is the definition of synergetics which I formulated more than a decade ago, and which formed the basis of my survey on the profound analogies in the behaviour of complex systems, includ­ ing those of sociology (H. Haken: Synergetics. An Introduction, Volume 1 of this series). As I have pointed out on many occasions, the universal validity of these concepts is neither accidental nor is it caused by a mere extension of physical rules to other fields, but is instead a consequence of deep-rooted struc­ tural properties of systems of interacting parts which are due to rigorous mathe­ maticallaws. Generally speaking, concepts and methods originally used in physics can be applied to sociological phenomena in two ways.