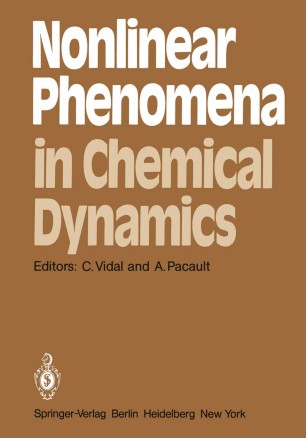 An international conference. titled Nonlinear Phenomena in Chemical Dynamics was held in Bordeaux on September 7-11, 1981. The present volume contains the text of lectures and abstracts of posters presented during the meeting. This conference is part of a series of scientific multidisciplinary meetings in which chemistry is involved at various levels. Amongst the most recent ones let us mention Aachen 1979, Bielefeld 1979, New York 1979, Elmau 1981. In addition, this meeting is a direct extension of the first one that took place in Bordeaux in 1978 on the topic "Far from equilibrium: instabilities and structures," at the conclusions of which we could write (cf. Far fram Equilibrium, Springer Series in Synergetics, Vol. 3): "The three key words, far fram equilibriUm, instabilities and structuPes, best illustrate the new concepts which emerge from the description of the dynamics of various systems relevant to many different research areas. " The present proceedings show how much these remarks have remained true, even though substantial progress has been achieved during the three last years. To get a ,deeper experimental knowledge of open reacting systems, to model and simulate reaction-diffusion systems, to develop the mathematical theory of dynamical sys­ tems, these are the main direction~ in current investigations.