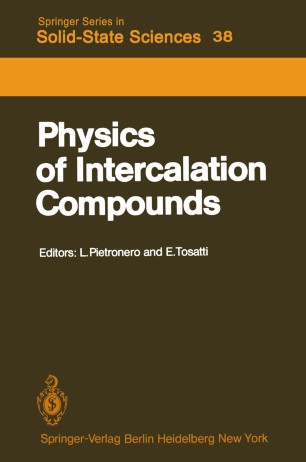 When an area of research is in fast growth, it often happens that no one single journal is to be found where most of the relevant publications are contained. Such is the case of the physics of intercalation compounds, a field which, by sitting at a corner point between materials science, solid­ state physics, and chemistry, finds its contributions largely scattered about in the literature. Given these circumstances it is of crucial interest to find a place where the most recent contributions and up-to-date referen­ ces can be found at once. For intercalated graphite and other similar com­ pounds this role has been played so far by proceedings of international con­ ferences, such as La Napoule (1977), Nijmegen (1979), Provincetown (1980), and Sendai (1980). The present book is an ideal continuation of this series, as it contains most of the invited and contributed papers of the Trieste International Con­ ference on the Physics of Intercalation Compounds, held in Trieste, Italy during the week 6-10 July 1981. The main emphasis is on intercalated graphite, though several interesting contributions deal with other materials, such as polyacetylene and transition­ metal compounds, or with general problems, such as two-dimensional melting. The book is divided into six sections-Structure and General Properties, Electronic Porperties, Stability and Phonons, Ordering and Phase Transitions, Magnetic Resonance, and Transport Properties-reflecting the main areas of interest, and also broadly the main discussion sessions of the Conference.