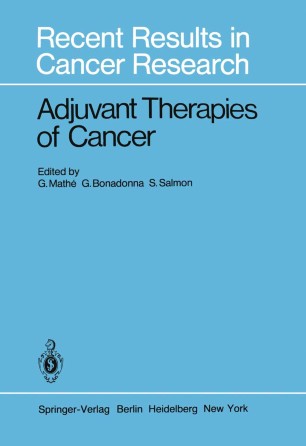 Transplantation of syngeneic (donor is a monozygous twin) or allogeneic (donor is an HLA-identical sibling) marrow provides the opportunity for aggressive antileukemic therapy without regard to marrow toxicity. Until 1975, marrow transplantation was carried out only after failure of all other therapy. Consequently, most patients were in advanced relapse. Six of 16 recipients of syngeneic marrow and 13 of 100 recipients of allogeneic marrow are still in remission after 5. 5-10 years [3, 7]. An actuarial survival curve of the first 100 patients grafted in Seattle after conditioning with cyclophos­ phamide (60 mg/kg on each of 2 successive days) and total body irradiation (1,000 rad) showed three periods of interest: (1) The first 4 months showed a rapid loss of patients associated with advanced illness, graft-versus-host disease, infections (in particular interstitial pneumonias), and recurrent leukemia; (2) from 4 months to 2 years, the curve showed a much slower rate of decline attributable primarily to recurrent leukemia; and (3) from 2-10 years, the curve was almost flat with a negligible loss of patients and no recurrent leukemia. This flat portion of the curve corresponded to 13% of the patients and indicates a strong probability that the majority of these survivors are cured of their disease [8]. Attempts at reducing the incidence of leukemic relapse after transplantation were made by a number of marrow transplant groups by added chemotherapy.