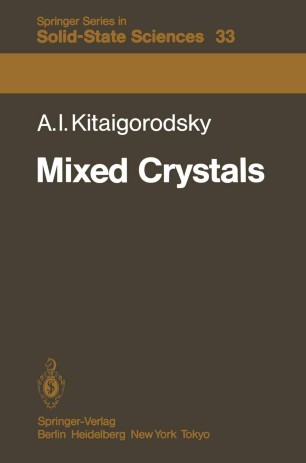 The two-word title of this book can only give an indication about its content and approach to the subject it deals with. In the course of time, the term has gradually become somewhat blurred. The reason is easy to see: similar problems are now more and more frequently studied by different branches of natural science. The term "mixed crystals" has acquired specific connotations in physics, chemistry, biology, and geology. One and the same term can now serve as a name for things which are either not quite the same or sometimes quite different. And this is precisely what happened to the two words in the title of the book. One of them, the term "crystal", for which crystallography had an un­ ambiguous definition, is now employed by biologists to describe the structure of cell membranes and by chemists who use it to denote degrees of polymer crystallinity. "Crystal" has thus become a broad term that can help describe any solid, or just a condensed state of a substance, if the solid has a suf­ ficient degree of order in the arrangement of its components. But the book is called "~lixed Crystals". The other word in its title, the adjective "mixed", has also developed several meanings. It is now thought ap­ plicable to both homogeneous and heterogeneous systems, that is, to crystals composed of different molecules and also to solids that are a mixture of crys­ tals with different structures.