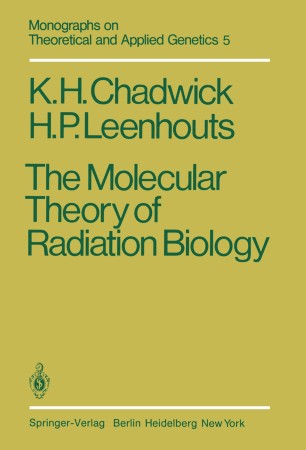 The Molecular Theory of Radiation Biology

Part of the Monographs on Theoretical and Applied Genetics book series (GENETICS, volume 5)

In late 1971 we were involved in a study of the interaction of radiation with matter and were trying to use measurements of radiation fluorescence in biological molecules to indicate how radiation affected living cells. It soon became apparent that we were working in the dark; the doses we used to get a significant signal were too large to be of interest for radiation biology and although the DNA molecule appeared to be the most likely target molecule we did not know which sort of events and which sort oflesions were the most important. We decided to alter our approach to see if we could find any consistent mathematical order in the radiobiological dose relationships. We found that cell survival curves could be very usefully described by a linear-quadratic dose relationship and very soon came to the somewhat premature but, as it turned out, most effective conclusion that the induction of DNA double strand breaks should be linear-quadratic. In deciding that the DNA double strand break was the crucial and all-important lesion we were able to associate the mathematical analysis with the biology of the cell and were able to relate known properties of the DNA molecule to known radiobiological effects. On the other hand, we were restricted and brought, from an abstract two-hit lesion which could have any property one wished, down to earth, to a defined moleccular structure of nanometer dimensions and well-known functions and properties.