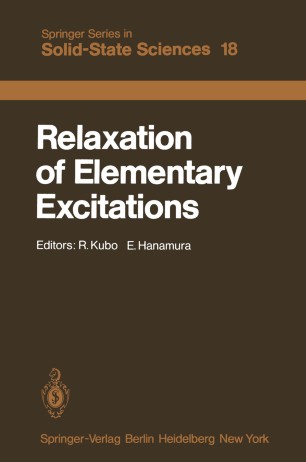 This is the Proceedings of the Taniguchi International Symposium on "Relaxation of Elementary Excitations" which was held October 12-16,1979, at Susono-shi (at the foot of f1t. Fuji) in Japan. The pleasant atmosphere of the Symposium is evidenced in the picture of the participants shown on the next page. The purpose of the symposium was to provide an opportunity for a limited number of active researchers to meet and to discuss relaxation processes and related phenomena not only of excitons and phonons in solids but also electronic and vibrational excitations in molecules and biological systems. First, the lattice relaxation, i.e., multi-phonon process, associated with electronic excitation, which plays important roles in self-trapping of an exciton and a particle (electron and hole) and also in degradation of semi­ conductor lasers, is discussed. Second, this lattice relaxation is studied as the intermediate state interaction in the second-order optical responses, i.e., in connection with the competitive behavior of Raman scattering and luminescence. Third, relaxation mechanisms and relaxation constants are by spectroscopic methods as well as by genuine nonlinear optical determined phenomena. Conversely the relaxation is decisive in coherent nonlinear optical phenomena such as laser, superradiance, and optical bistability. Fourth, the role played by relaxation processes is discussed for optical phenomena in macromolecules and biological system such as photosynthesis.