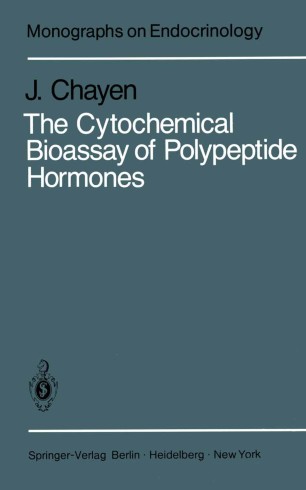 The Cytochemical Bioassay of Polypeptide Hormones

Part of the Monographs on Endocrinology book series (ENDOCRINOLOGY, volume 17)

The cytochemical bioassay system was described in a short abstract in 1971, and more fully, in the cytochemical bioassay of corticotrophin, in 1972. Since then, cytochemical bioassays have been described for several polypeptide hormones, and these assays are already widely used. It is expedient that the subject should be reviewed, as it is in this monograph, by one writer who has had the good fortune to have taken part in the growth of cytochemistry from its early origins to its present position as the basis of possibly the most sensitive bioassay system currently available. However, it should be noted that major contributions have been made by many, both to the development of the subject and to the establishment of the bioassays. The object of this preface is to try to give some perspective to the growth of this subject and to record that the cytochemical bioassay system has been fostered by many outstanding scientists in an atmosphere of remarkable goodwill. To begin with, there could have been no cytochemical bioassays until cytochem­ istry had been converted from its rather unsure origins into a precise and quantitative form of cellular biochemistry. This was done with skill and enthusiastic dedication by my colleagues, Dr. Lucille Bitensky, Dr. F. P. Altman, Dr. R. G. L. W. Poulter and Mr. A. A. Silcox, first at the Royal College of Butcher, Dr.