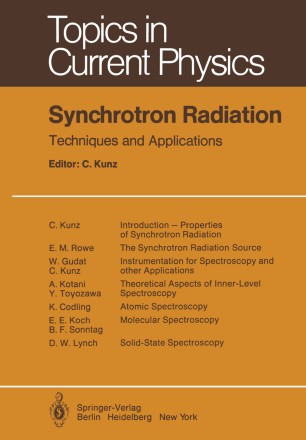 Synchrotron radiation as a spectroscopic research tool has undergone a most inter­ esting and astonishing historical development and has now come to the stage of an exciting boom. The machines which produce synchrotron radiation were built and de­ veloped exclusively for other purposes in the past, namely high-energy physics. At the same time, however, they involuntarily became better and better light sources for the spectral range from the visible to the hard x-ray region. Now we are at the point that the first few storage rings have gone into operation as machines dedicated to synchrotron radiation and several more are in the stage of construction and planning. All this was brought about by the successful research performed during the past fifteen years in which several groups allover the world haVe participated at dif­ ferent accelerator centers mostly symbiotic with high-energy physics. As it happens with a young and rapidly developing field, the number of reviews and monographs is still minute. The objective of this book is to fill an apparent gap and to provide a sound basis for those who are interested in synchrotron radiation and its applica­ tions.