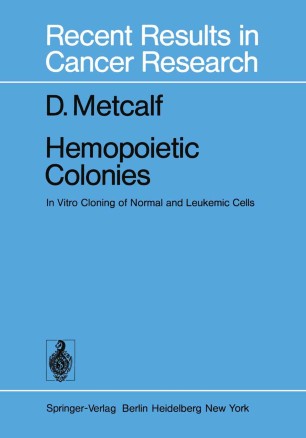 In Vitro Cloning of Normal and Leukemic Cells

The cloning of hemopoietic cells in semisolid medium began some 12 years ago, and when colonies of T = and B = lymphocytes were grown by several groups last year, the last major subclasses of hemopoietic cells had been successfully cultured in vitro. The time seemed appropriate to write a short general account of this exciting new area of hematology, emphasizing particularly the potential value of these new techniques for direct studies on patients with leukemia and allied diseases. I had hoped to refer to, or at least record, every paper published in this field, but the literature proved to be larger than I had realized, and furthermore, some areas were so active that chapters had to be rewritten over a period of less than a year. I regret that ·what follows is an incomplete account and no doubt, by the time this book becomes available, the material will be even more out of date. However, I have described the basic techniques in some detail and have tried, where possible, to explain how and why the techniques can fail. It is already possible to see patterns, perhaps even principles, emerging from this work which may well be applicable to other cell populations. These have been emphasized in the text in an attempt to make this review as creative as possible.