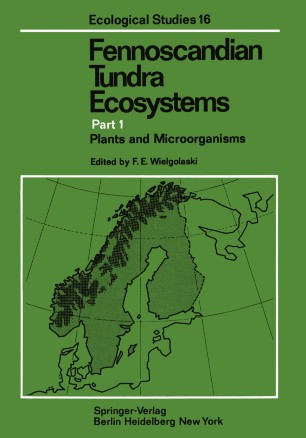 The term Fennoscandia is used to denote Finland and the Scandinavian peninsula, which comprises Norway and Sweden and sometimes also neigh­ bouring districts of the USSR. The western part of the Scandinavian peninsula is mountainous with peaks mostly within the range 1000-2000 m above sea level. Permafrost is not usually found in the southern districts of these alpine zones, but occurs in the northeastern part of Fennoscandia in mire, even at a low elevation. If tundra is defined as areas of permafrost, only very limited regions of Fennoscandia could be included. However, in the present volumes, we have used the word tundra in a broader sense as approximating areas with mean annual air 0 temperature below 0 C at meteorological standard height (1.5-2 m); it is often used in this sense in North America. This usage allows all alpine zones to be included, along with the subalpine birch zone and certain open subarctic woodland ("forest tundra" in Russian usage).