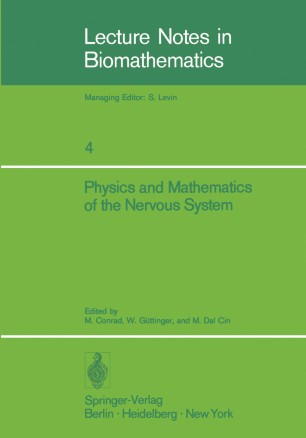 Physics and Mathematics of the Nervous System

Proceedings of a Summer School organized by the International Centre for Theoretical Physics, Trieste, and the Institute for Information Sciences, University of Tübingen, held at Trieste, August 21–31, 1973

This volume is the record and product of the Summer School on the Physics and Mathematics of the Nervous System, held at the International Centre for Theoretical Physics in Trieste from August 21-31, 1973, and jointly organized by the Institute for Information Sciences, University of Tlibingen and by the Centre. The school served to bring biologists, physicists and mathemati­ cians together to exchange ideas about the nervous system and brain, and also to introduce young scientists to the field. The program, attended by more than a hundred scientists, was interdisciplinary both in character and participation. The primary support for the school was provided by the Volkswagen Foundation of West Germany. We are particularly indebted to Drs. G. Gambke, M. -L Zarnitz, and H. Penschuck of the Foundation for their in­ terest in and help with the project. The school also received major support from the International Centre for Theoretical Physics in Trieste and its sponsoring agencies, including the use of its excellent facili­ ties. We are deeply indebted to Professor A. Salam for his kind co­ operation and also to Professor P. Budini, Dr. A. M. Hamende, and to the many members of the Centre staff whose hospitality and efficiency con­ tributed so much to the success of the school. We are pleased to acknow­ ledge the generous ~id and cooperation of the University of Tlibingen and would like to thank its President, A.