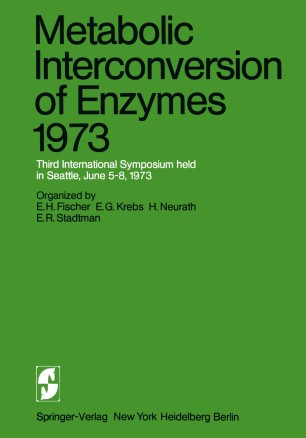 The First International Symposium on the Metabolic Interconversion of Enzymes was held in Santa Margherita Ligure, Italy, in May, 1970, under the direction of Professor G. Bonsignore. Because of rapid developments in this field, a second Symposium was organized a year and a half later in Rottach-Egern, Germany (October, 1971) by Professors E. He1mreich, H. Holzer and O. Wieland. At that time, so much new information had accumulated that it was decided to repeat such conferences approx­ imately every other year; the United States was chosen as the next site. This publi­ cation reports the Proceedings of the Third International Symposium on the Metabolic Interconversion of Enzymes held at the Battelle Seattle Research Center, Seattle, Washington, June 5 - 8, 1973. The conferences were originally designed to examine the control of metabolic reactions by covalent modification of certain key enzymes. Covalent, as opposed to allosteric or metabolic, regulation had first been recognized some fifteen years be­ fore. Initially thought to represent an added sophistication in regulatory processes possibly reserved to higher organisms, covalent regulation has now been found in both prokaryotes and eukaryotes. Those early studies in covalent modification revealed for the first time the existence of special "converter" enzymes whose purpose in life is to switch other molecules from one state of activity to another.