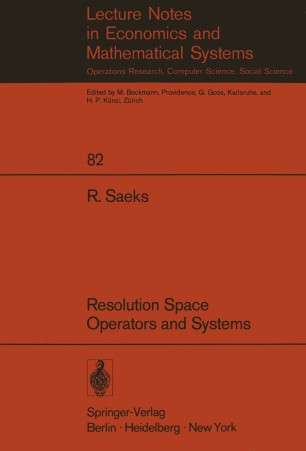 If one takes the intuitive point of view that a system is a black box whose inputs and outputs are time functions or time series it is natural to adopt an operator theoretic approach to the stUdy of such systems. Here the black box is modeled by an operator which maps an input time function into an output time function. Such an approach yields a unification of the continuous (time function) and discrete (time series) theories and simultaneously allows one to formulate a single theory which is valid for time-variable distributed and nonlinear systems. Surprisingly, however, the great potential for such an approach has only recently been realized. Early attempts to apply classical operator theory typically having failed when optimal controllers proved to be non-causal, feedback systems unstable or coupling networks non-lossless. Moreover, attempts to circumvent these difficulties by adding causality or stability constraints to the problems failed when it was realized that these time based concepts were undefined and; in fact, undefinable; in the Hilbert and Banach spaces of classical operator theory.