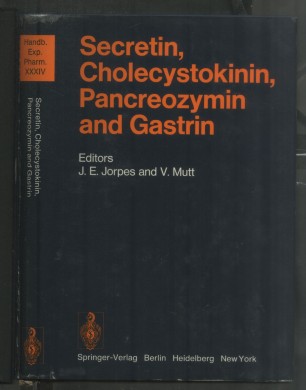 In the beginning of this century physiology witnessed the creation of a new concept, the hormonal regulation of the work of the digestive organs. It was found that such essential functions as the flow of pancreatic juice and emptying of bile into the intestine were regulated by two hormones, secretin and cholecystokinin, respectively. Already in 1925 French authors attempted to measure the functional capacity of the exocrine pancreas by means of stimulation with secretin. The use­ fulness of the secretin test in this connection was definitely established by Scandinavian workers in the 1930's. In spite of the difficulties in obtaining secretin American authors succeeded in keeping the interest in the secretin test alive. The development in the 1950's of counter-current, ion exchange and chromato­ graphic techniques offered new possibilities in this field. The intestinal hormones were known to be relatively low molecular peptides and these could now be isolated in pure form. Thus secretin was isolated in 1961, and cholecystokinin in 1964. The newly developed methods for peptide analysis likewise soon brought us full information about the primary structure of the peptides. Gastrin, the specific stimulant of the gastric acid secretion, which was discovered in 1905 and acknowledged as a hormone in 1938, was the first of the gastrointestinal hormones for which the structure became known. This was in 1964. Synthesis soon followed. These developments are reviewed in the first chapter of the present volume.