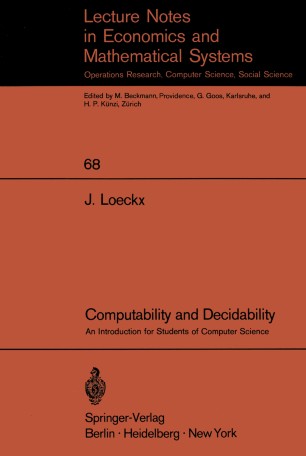 An Introduction for Students of Computer Science

The present Lecture Notes evolved from a course given at the Technische Hogeschool Eindhoven and later at the Technische Hogeschool Twente. They are intended for computer science students; more specifically, their goal is to introduce the notions of computability and decidability, and to prepare for the study of automata theory, formal language theory and the theory of computing. Except for a general mathematical background no preliminary knowledge is presupposed, but some experience in programming may be helpful. While classical treatises on computability and decidability are oriented towards the foundation of mathematics or mathematical logic, the present notes try to relate the subject to computer science. Therefore, the expose is based on the use of strings rather than on that of natural numbers; the notations are similar to those in use in automata theory; in addition, according to a common usage in formal language theory, most of the proofs of computability are reduced to the semi-formal description of a procedure the constructivity of which is apparent to anybody having some programming experience. Notwithstanding these facts the subject is treated with mathematical rigor; a great number of informal comments are inserted in order to allow a good intuitive understanding. I am indebted to all those who drew my attention to some errors and ambiguities in a preliminary version of these Notes. I want also to thank Miss L.A. Krukerink for her diligence in typing the manuscript.