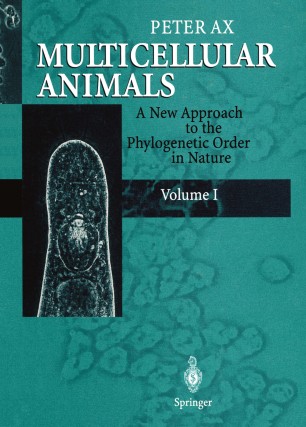 A new Approach to the Phylogenetic Order in Nature Volume 1

No one can ever have secure knowledge about the gods and creatures, and should anyone hit by chance upon the right thing, he will not know it for sure; that is why everything that we believe to be true is "opinion". XENOPHANES around 500 B.C. (According to ROD 1988, p.85) The goal of phylogenetic systematics (cladistics) is to discover the kinship relations between all organisms on earth and to translate the order we perceive in Nature into an equivalent man-made system. Although the goal is easily formulated, the path is thorny, and the results achieved continue to be imperfect. This is the fate of any science that bases its propositions on the interpretation of histor­ ical evidence. The diversity found in the millions of species originated as a result of the continuous splitting of biopopulations through time. Combined with this was the emergence of hierarchically linked des­ cent communities of species. We call the process of origin of descent communities phylogenesis. We do not know, however, the exact course of phylogenesis - we can only formulate hypotheses. The historical evidence at hand consists of the feature patterns of extant species and of extinct species with their combination of original and derived traits which are the result of evolution.