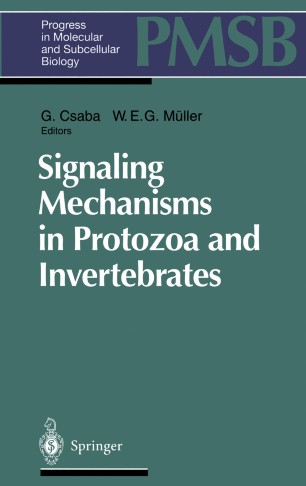 Signaling Mechanisms in Protozoa and Invertebrates

Part of the Progress in Molecular and Subcellular Biology book series (PMSB, volume 17)

Comparative endocrinology helps to find the roots of homeostatic regulation in organisms. In this context, many years ago a series of experiments were done, which demonstrated the hormonal regula­ tion also on the invertebrate level. The mechanisms are partly similar, partly different, from those found in vertebrates. The new receptor era of mammalian endocrinology stimulated research on invertebrate hormone receptors, and sophisticated methods are applied also to determine hormones. The experiments demonstrated the existence and even similar function of these structures and signaling molecules. However, data on hormones and receptors at the lowest level of metazoan life and the highest level of protozoan life were not at our disposal. About two decades ago, first observations on the presence of hormone receptors reacting to vertebrate hormones in protozoa were made. Since the early 1980s we know that hormone-like molecules similar to those of higher vertebrates are present also in unicellular organisms. The presence of some second messengers in Tetrahymena was recognized. Since then, the research has been extended and many structures - previously believed to be solely vertebrate characteristics, such as opiate receptors, similar to mammalian ones - were found in unicellular organisms. These observations justified the assumption of a complete endocrine system at protozoan level, where - considering the unicellularit- this seemed to be not required. However, it became clear that the roots of endocrine communication date back at least 2 billion years.