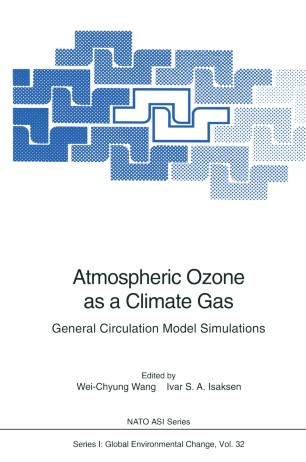 Atmospheric Ozone as a Climate Gas

One of the major findings in the 1992 IPCC report and the 1994 World Meteorological Organization's Ozone Assessment report was the identification of possible climatic effects over the last few decades resulting from anthropogenic ally-induced changes in atmospheric ozone. The initial quantitative estimates of their direct climatic effects indicate significant impacts, though large uncertainties exist and studies using general circulation models are needed. A point that needs to be addressed in particular is that atmospheric ozone differs from greenhouse gases in that it is formed and destroyed by chemical processes in the atmosphere due to interaction involving a large number of source gases (e. g. H0, NO ' CO, 2 x NMHC, N0, CH and the CFCs). Therefore, the indirect effect of climate-chemistry 2 4 interaction involving atmospheric ozone is an important aspect for consideration in general circulation models. During the last few years, there have been several international workshops related to atmospheric ozone. In 1987, a NATO workshop on atmospheric ozone was held in Lillehammer, Norway. More recently, two workshops were organized to discuss the topic "General Circulation Model Study of Climate-Chemistry Interaction. " The first was held August 19-21, 1992, in Oslo, Norway, and the second held May 26-27,1993, in Albany, New York, USA. The two workshops were IAMAP activities under the Trace Constituent Working Group.