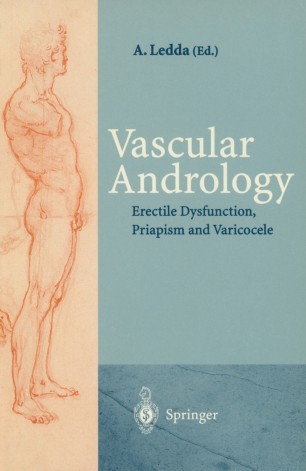 Erectile Dysfunction is a complex syndrome associated and determined by several separate vascular and nonvascular factors. In recent years, the evolution of noninvasive vascular technology used to ivestigate macro- and microcirculation in vascular disorders has produced a large amount of information and increased our knowledge in vascular pathphysiology.
In the specific field of vasculogenic dysfunction two major problems have been defined using ultrasoung based methods: a decrease in arterial inflow and an increased venous outflow. As erection is the result of the delicate balance and timing between blood inflow and outflow, these problems are compatible and often overlapping as both vascular alterations are present in patients with vasculogenic erectile dysfunction.
Apart from the problems regarding macrocirculation the authors discuss the role of microcirculation, the presence of localised or diffuse fibrosis in the corpora cavernosa, the possibly overstated role of venous leak, and pharmacology and its new interesting developments. In the field of infertility a new test using color duplex to reliably evaluate the presence of asymptomatic varicocele is described.
As most problems in andrology are related to vascular alterations, the evaluation and quantification techniques for the vascular abnormalities described in this volume have created a new branch in medicine the editor and his group of authors are a major part of. They have delivered a comprehensive book which deals with these new trends in andrology and stresses the importance of vascular disorders in erectile dysfunction and varicocele in association with infertility.