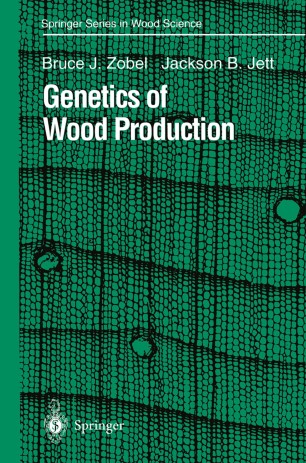 Over the past years, a great deal has been learned about variation in wood prop­ erties. Genetic control is a major source of variation in most wood properties. Wood is controlled genetically both directly in the developmental or internal pro­ cesses of wood formation and indirectly by the control of tree form and growth patterns. Emphasis in this book will be on the internal control of wood production by genetics although there will be two chapters dealing with the indirect genetic control of wood, which was covered in detail in the previous book by Zobel and van Buijtenen (1989). The literature on the genetics of wood is very variable, SO'lle quite superficial, on which little reliance can be placed, and some from well-designed and correctly executed research. When suitable, near the end of each chapter, there will be a summary with the authors' interpretation of the most important information in the chapter. The literature on the genetics of wood can be quite controversial. This is to be expected, since both the environment and its interaction with the genotype of the tree can have a major effect on wood properties, especially when trees of similar genotypes are grown under widely divergent conditions. Adding to the confusion, studies frequently have been designed and analyzed quite differently, resulting in conflicting assessments of results.