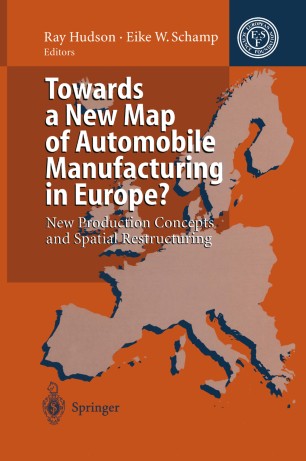 Towards a New Map of Automobile Manufacturing in Europe?

This book is the product of four years of collaborative work within the framework of the European Science Foundation's Regional and Urban Restructuring in Europe (RURE) programme. With one exception, all of the chapters have been prepared by participants in RURE - the exception being that commissioned from Conti and Enrietti on Fiat and Italy to provide a fuller coverage of changes in the main automobile producing companies and countries of Europe. A - perhaps the - central theme around which the RURE programme was conceived is that the restructuring of the production system lies at the heart of the changing map of Europe. Equally, it continues to be the case that the automobile industry lies at the cutting edge of the search for viable new models of production. Some eighty years ago the automobile industry occupied a pivotal position in the transition from craft to mass production - indeed "Fordism" came to denote not just a particular micro-economic model of production organisation in the factory but a macro-scale model of economic development, characterized by a particular pattern of relations between mass production, mass consumption and national state regulation. From the late 1960s, however, it became increasingly clear that Fordism as a macro-scale model of advanced capitalist development was reaching its limits.