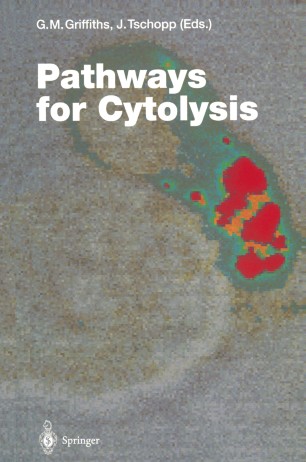 At first glance the destruction of a target cell by a killer cell seems to be a simple endeavor. A closer look, however, reveals the complex mechanisms underlying this task. Killer cells are able to specifically recognize altered or infected cells. A transient contract with target cells has to be established to allow the delivery of lethal molecules or signals. The killer cell then disengages from the damaged cell and moves away to kill other target cells. After the eradication of the target cells, the number or activity of activated killer cells has to be reduced to avoid nonspecific killing of innocent cells. In 1992, Herman Eisen concluded, in his introductory remarks in the most recent volume on lymphocyte cytotoxicity (EISEN 1993): "Given the immense amount of effort made in the past decade to understand these (lytic) mechanisms, it seems surprising that a consensus about the principal mechanisms has not been reached." Since that time, advances made in the field of cell-mediated cytolysis are so significant that our knowledge regarding the lytic mechanisms has been considerably augmented. Much of this is due to studies with transfectants and mutants-either naturally occurring or generated by gene targeting. It is now clear that there are two predominant pathways which act hand in hand and lead to efficienttarget cell destruction.