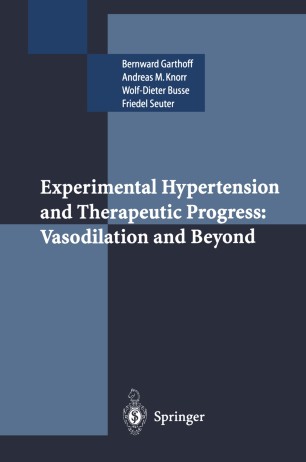 Experimental Hypertension and Therapeutic Progress: Vasodilation and Beyond

At the workshop held in Leverkusen on December 1, 1993, Professor Dr. Stanislav Kazda was honored on the occasion of his retirement for his scientific contributions and his involvement in drug development in our company, Bayer AG. In a recent article by Eugene Garfield (Current ContentslLife Sciences 36:3-15, 1993), what most of us participating in this workshop have supposed for years was confirmed: that Kazda is one of the leading scientific authors in academia worldwide. In the said survey of citations of biomedical research articles, Kazda is number 29 in terms of actual impact, individual ~itations, and total number of published manuscripts (and this only covers the time period from 1981 to 1992). In addition, his work has contributed significantly to the number eight ranking of our company in the so-called Corporation List. With the support of colleagues inside and outside the company, Kazda made a new substance class, the 1, 4-dihydropyridines, discovered by Bossert and Vater, well known to the scientific community on a worldwide basis and established its outstanding usefulness in hypertension. He has contributed numerous publi­ cations on the pharmacology of these calcium antagonists and organized several international conferences on the topic. Although he became famous as a cardiovascular pharmacologist, he started his career as a physician with the subjects obstetrics and gynecology. He studied at the Medical Faculty in Prague and at the Universities of Kasan and Kharkow (1950-1957).