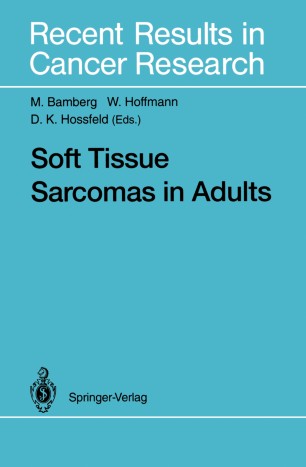 Sarcomas represent a group of rare tumors which arise from the largest tissue compartment of the body, but account only for about 1 % of all malignancies. Among this group of tumors, soft tissue sarcomas in adults are, in addition to osteosarcomas, the most important. In the diagnostic workup of soft tissue sarcomas modern radiological investigation methods such as CT and MRI techniques are being critically evaluated. While it is widely accepted that the conventional, stained microscopic specimen is still the cornerstone for properly planned treatment stra­ tegies, immunohistochemistry has come to play an indis­ pensable role in accurate classification. Reviewing the surgical techniques, the treatment of musculo-skeletal malignancies, especially of soft tissue sarcomas, has changed considerably over the past decades. While amputation used to be the surgical treatment of choice limb-saving procedures have now become an im­ portant therapeutic modality in treating such lesions, particularly in combination with percutaneous or interstitial radiotherapy. Despite adequate local treatment, many patients with soft tissue sarcomas will ultimately develop metastatic disease, usually in the lungs. For this reason, effective ad­ juvant systemic treatment should be given simultaneously with or soon after treatment of local disease. The results of several randomized trials evaluating adjuvant chemotherapy have been reported in the meanwhile, indicating im­ proved, disease-free survival with a trend towards improved overall survival. In disseminated disease, drug combi- VI Preface nations or single agents are used as palliative treatment and might help to improve survival in selected subgroups.