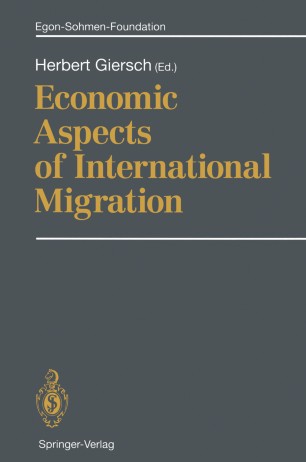 This is the fourth volume in a series of books published for the Egon-Sohmen-Foundation. Like its predecessors, it contains the papers discussed at a symposium. This symposium was held in Vancouver, Canada, thanks to the organizational support of Herbert Grubel, who also gave advice on finding and selecting competent participants. The format was the same as for the pre­ vious conferences that had taken place in Europe-at Laxenburg/ Austria ("Towards a Market Economy in Central and Eastern Europe"), Tegernsee/Bavaria ("Money, Trade, and Competition"), and Linz/ Austria, Egon Sohmen's birthplace ("Economic Pro­ Concems")-and that led to similar gress and Environmental conference volumes published by the Springer-Verlag. The topic "Economic Aspects ofInternational Migration" was chosen because we thought that migration from East to West would soon become an issue in Europe, that its implications should be discussed in a sober manner publicly as well as among experts, and that a conference volume on its economic implica­ tions and on the well-researched experience of immigration coun­ tries like the U.S.A. and Canada would be the best contribution the Egon-Sohmen-Foundation could make in this field. It is also remarkable in this context that Egon Sohmen was a migrant of sorts, just as some of those who shared responsibility for this conference. The late Egon Sohmen, in whose memory his brother Helmut established the foundation, was born in Austria (in 1930), received his education in Germany (University ofTiibingen) and the U.S.A.