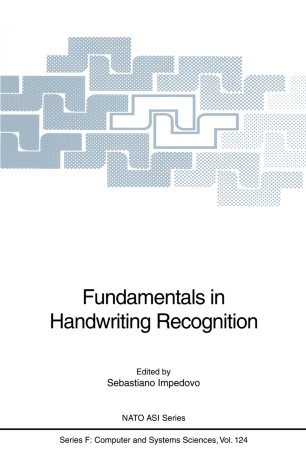 For many years researchers in the field of Handwriting Recognition were considered to be working in an area of minor importance in Pattern Recog­ nition. They had only the possibility to present the results of their research at general conferences such as the ICPR or publish their papers in journals such as some of the IEEE series or PR, together with many other papers generally oriented to the more promising areas of Pattern Recognition. The series of International Workshops on Frontiers in Handwriting Recog­ nition and International Conferences on Document Analysis and Recognition together with some special issues of several journals are now fulfilling the expectations of many researchers who have been attracted to this area and are involving many academic institutions and industrial companies. But in order to facilitate the introduction of young researchers into the field and give them both theoretically and practically powerful tools, it is now time that some high level teaching schools in handwriting recognition be held, also in order to unite the foundations of the field. Therefore it was my pleasure to organize the NATO Advanced Study Institute on Fundamentals in Handwriting Recognition that had its origin in many exchanges among the most important specialists in the field, during the International Workshops on Frontiers in Handwriting Recognition.