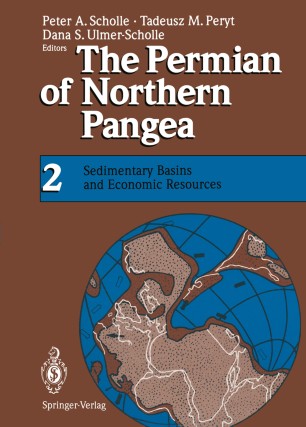 The Permian of Northern Pangea

The Permian was a remarkable time period. It represents the maximum stage of Pangean continental assembly, includes a major global climatic shift from glacial to nonglacial conditions (icehouse-greenhouse transition), and is ter­ minated by one of the most profound faunal/floral extinction events in the Earth's history. In addition, Permian oceans, although poorly understood, must have had some quite unique characteristics. Permian seas reached the most extreme values of carbon, sulfur, and strontium isotopic ratios ever achieved in Phanerozoic time, and the isotopic ratios of all three elements abruptly returned to more "normal" values at, or very close to, the Permo­ Triassic boundary. Finally, the Permian is marked by an abundance of important sedimentary mineral resources. It has large fossil fuel concentra­ tions (coal, oil, and natural gas), enormous phosphate reserves, and very extensive evaporite deposits, including gypsum, anhydrite, and halite, as well as a variety of potash salts. Study of the Permian has been hampered, however, by a number of factors. These include a scattered geologic literature (presented in a variety of languages), a confusing regional and global stratigraphic framework (based, in part, on inadequate type sections), and largely provincial, often poorly correlatable faunas. All have contributed to the sparsity and inadequacy of overviews of this critical geological interval. These two volumes attempt to bring together some of the widely scattered observations about these fascinating rocks, at least for the northern (predominantly nonglacial) parts of Pangea.