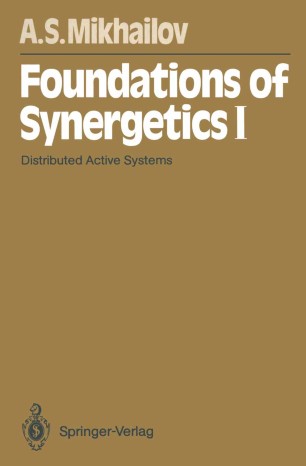 Foundations of Synergetics I

This book gives an introduction to the mathematical theory of cooperative behavior in active systems of various origins, both natural and artificial. It is based on a lecture course in synergetics which I held for almost ten years at the University of Moscow. The first volume deals mainly with the problems of pattern fonnation and the properties of self-organized regular patterns in distributed active systems. It also contains a discussion of distributed analog information processing which is based on the cooperative dynamics of active systems. The second volume is devoted to the stochastic aspects of self-organization and the properties of self-established chaos. I have tried to avoid delving into particular applications. The primary intention is to present general mathematical models that describe the principal kinds of coopera­ tive behavior in distributed active systems. Simple examples, ranging from chemical physics to economics, serve only as illustrations of the typical context in which a particular model can apply. The manner of exposition is more in the tradition of theoretical physics than of in mathematics: Elaborate fonnal proofs and rigorous estimates are often replaced the text by arguments based on an intuitive understanding of the relevant models. Because of the interdisciplinary nature of this book, its readers might well come from very diverse fields of endeavor. It was therefore desirable to minimize the re­ quired preliminary knowledge. Generally, a standard university course in differential calculus and linear algebra is sufficient.