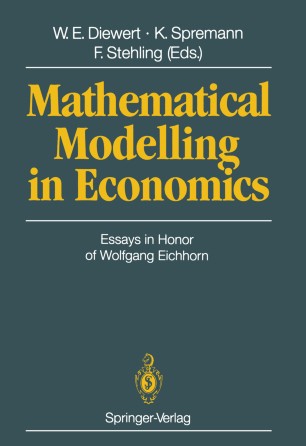 Essays in Honor of Wolfgang Eichhorn

Wolfgang Eichhorn was born on August 18, 1933 in Ansbach, Germany - most likely, under a lucky star (if not, fate must have made a mistake). Everything in his life - be it childhood, education, academic career, or private life - developed in a pleasurable and successful way. But it would be a mistake and an injustice to credit his achievements to a lucky star. First, the success and recognition he earned (in particular, for his academic achieve­ ments) are due to the motivation and the capabilities that he has possessed from a very early age on. His abilities are reflected in over a hundred publications in leading academic journals. All of them share the unmistakable clarity, the precision, and the originality that he is known for. He has become one of the leading and most successful advocates of a model-based approach to economic problems, a methodology that has a long tradition in the natural (but not in the social) sciences. The rigor and the tools which are char­ acteristic of his work make it clear that he never denied his academic background as a mathematician. Therefore, the choice of the title for this volume was an obvious one. Second, he always shares his enthusiasm and his high spirits with many people. This may be even more remarkable than the above mentioned achievements, because this fea­ ture is a very rare one.