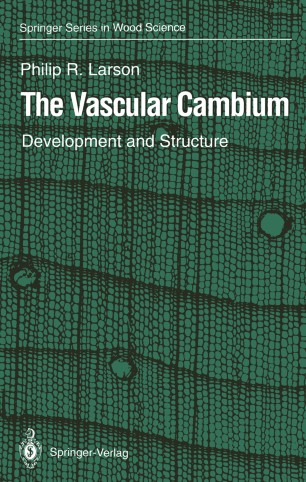 The cambium has been variously defined as follows: "The actively dividing layer of cells that lies between, and gives rise to, secondary xylem and phloem (vascular cambium)" (IAWA 1964); "A meristem with products of periclinal divisions commonly contributed in two directions and arranged in radial files. Term pre­ ferably applied only to the two lateral meristems, the vascular cambium and cork cambium, or phellogen" (Esau 1977); and, "Lateral meristem in vascular plants which produces secondary xylem, secondary phloem, and parenchyma, usually in radial rows; it consists of one layer of initials and their undifferentiated deriva­ tives" (Little and Jones 1980). Clearly, the cambium is a diverse and extensive meristem, and no one defini­ tion will encompass all manifestations of what anatomists consider cambium. Its diversity and extent are further exemplified by a single plant, such as a temperate­ zone tree, in which procambium is initiated in the embryo and perpetuated throughout every lateral, primary meristem before giving rise to cambium in the secondary body. The cambium thereafter performs its meristematic task of producing daughter cells that differentiate to specialized tissue systems. The cam­ bium, however, does not remain static. Its derivatives vary either in form, or TImc­ tion, or rate of production at different positions on the tree, with age of the tree, and with season of the year. Moreover, the cambium responds both to internal sig­ nals and to external stimuli such as environment or wounding.