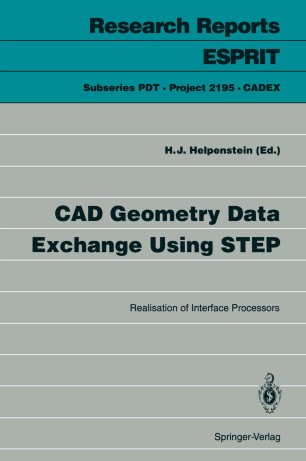 The Product Data Technology Advisory Group, short PDTAG, was established on 30 September 1992 under the auspices of the ESPRIT CIME Division of the Directorate General XIII of the European Commission. Its goals include promoting European cooperation and improving the European infrastructure in Product Data Technology, particularly in connection with the new standard STEP (ISO 10303). The dissemination of information on Product Data Technology and on European contributions to STEP is of crucial importance to this development. The current volume is the first title in a new PDTAG subseries to Springer Publishers' Research Reports ESPRIT. This new subseries intends to form a comprehensive repository of publications on Product Data Technology resulting from ESPRIT Projects and from European contributions to standardisation based on ISO/STEP. PDTAG welcomes the opportunity to make this information more accessible under the format of a coherent subseries within the established framework of Research Reports ESPRIT. Much valuable background on the new international PDT standard can thus be found in the same collection.