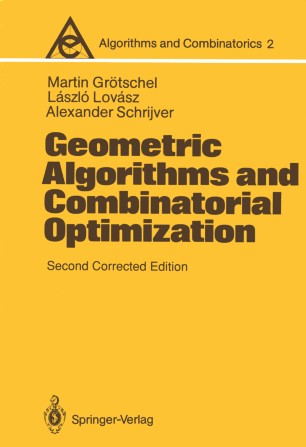 Part of the Algorithms and Combinatorics book series (AC, volume 2)

Since the publication of the first edition of our book, geometric algorithms and combinatorial optimization have kept growing at the same fast pace as before. Nevertheless, we do not feel that the ongoing research has made this book outdated. Rather, it seems that many of the new results build on the models, algorithms, and theorems presented here. For instance, the celebrated Dyer-Frieze-Kannan algorithm for approximating the volume of a convex body is based on the oracle model of convex bodies and uses the ellipsoid method as a preprocessing technique. The polynomial time equivalence of optimization, separation, and membership has become a commonly employed tool in the study of the complexity of combinatorial optimization problems and in the newly developing field of computational convexity. Implementations of the basis reduction algorithm can be found in various computer algebra software systems. On the other hand, several of the open problems discussed in the first edition are still unsolved. For example, there are still no combinatorial polynomial time algorithms known for minimizing a submodular function or finding a maximum clique in a perfect graph. Moreover, despite the success of the interior point methods for the solution of explicitly given linear programs there is still no method known that solves implicitly given linear programs, such as those described in this book, and that is both practically and theoretically efficient. In particular, it is not known how to adapt interior point methods to such linear programs.