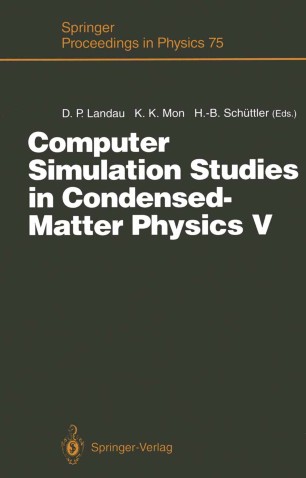 As the role of computer simulations began to increase in importance, we sensed a need for a "meeting place" for both experienced simulators and neophytes to discuss new techniques and results in an evironment which promotes extended discussion. As a consequence of these concerns, The Center for Simulational Physics established an annual workshop on Recent Developments in Computer Simulation Studies in Condensed-Matter Physics. This year's workshop was the fifth in this series and the interest which the scientific community has shown demonstrates quite clearly the useful purpose which the series has served. The workshop was held at the University of Georgia, February 17-21, 1992, and these proceedings form a record of the workshop which is published with the goal of timely dissemination of the papers to a wider audience. The proceedings are divided into four parts. The first part contains invited papers which deal with simulational studies of classical systems and includes an introduction to some new simulation techniques and special purpose computers as well. A separate section of the proceedings is devoted to invited papers on quantum systems including new results for strongly correlated electron and quan­ tum spin models. The third section is comprised of a single, invited description of a newly developed software shell designed for running parallel programs. The contributed presentations comprise the final chapter.