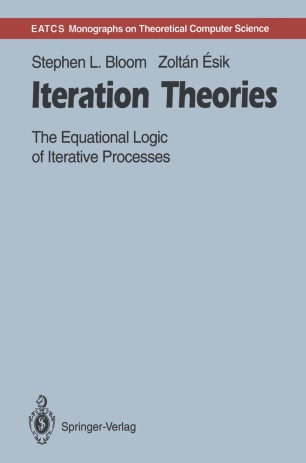 The Equational Logic of Iterative Processes

This monograph contains the results of our joint research over the last ten years on the logic of the fixed point operation. The intended au­ dience consists of graduate students and research scientists interested in mathematical treatments of semantics. We assume the reader has a good mathematical background, although we provide some prelimi­ nary facts in Chapter 1. Written both for graduate students and research scientists in theoret­ ical computer science and mathematics, the book provides a detailed investigation of the properties of the fixed point or iteration operation. Iteration plays a fundamental role in the theory of computation: for example, in the theory of automata, in formal language theory, in the study of formal power series, in the semantics of flowchart algorithms and programming languages, and in circular data type definitions. It is shown that in all structures that have been used as semantical models, the equational properties of the fixed point operation are cap­ tured by the axioms describing iteration theories. These structures include ordered algebras, partial functions, relations, finitary and in­ finitary regular languages, trees, synchronization trees, 2-categories, and others.