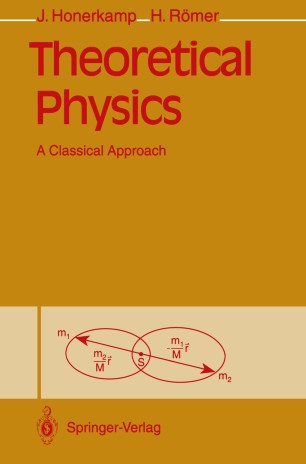 This introduction to classical theoretical physics emerged from a course for students in the third and fourth semester, which the authors have given several times at the University of Freiburg (Germany). The goal of the course is to give the student a comprehensive and coherent overview of the principal areas of classical theoretical physics. In line with this goal, the content, the terminology, and the mathematical techniques of theoret­ ical physics are all presented along with applications, to serve as a solid foundation for further courses in the basic areas of experimental and theoretical physics. In conceiving the course, the authors had four interdependent goals in mind: • the presentation of a consistent overview, even at this elementary level • the establishment of a well-balanced interactive relationship between phys­ ical content and mathematical methods • a demonstration of the important applications of physics, and • an acquisition of the most important mathematical techniques needed to solve specific problems. In relation to the first point, it was necessary to limit the amount of material treated. This introductory course was not intended to preempt a later, primarily On the other hand, we aimed for a certain completeness in theoretical, course.