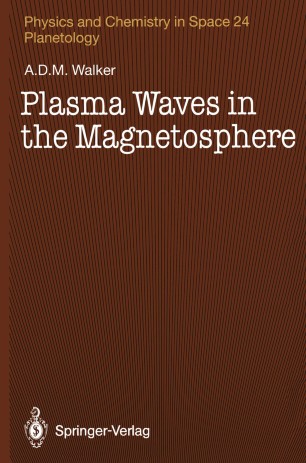 Plasma Waves in the Magnetosphere

Part of the Physics and Chemistry in Space Planetology book series (SPACE, volume 24)

This book is a study of plasma waves which are observed in the earth's magnetosphere. The emphasis is on a thorough, but concise, treatment of the necessary theory and the use of this theory to understand the manifold varieties of waves which are observed by ground-based instruments and by satellites. We restrict our treatment to waves with wavelengths short compared with the spatial scales of the background plasma in the mag­ netosphere. By so doing we exclude large scale magnetohydrodynamic phenomena such as ULF pulsations in the Pc2-5 ranges. The field is an active one and we cannot hope to discuss every wave phenomenon ever observed in the magnetosphere! We try instead to give a good treatment of phenomena which are well understood, and which illustrate as many different parts of the theory as possible. It is thus hoped to put the reader in a position to understand the current literature. The treatment is aimed at a beginning graduate student in the field but it is hoped that it will also be of use as a reference to established workers. A knowledge of electromagnetic theory and some elementary plasma physics is assumed. The mathematical background required in­ cludes a knowledge of vector calculus, linear algebra, and Fourier trans­ form theory encountered in standard undergraduate physics curricula. A reasonable acquaintance with the theory of functions of a complex vari­ able including contour integration and the residue theorem is assumed.