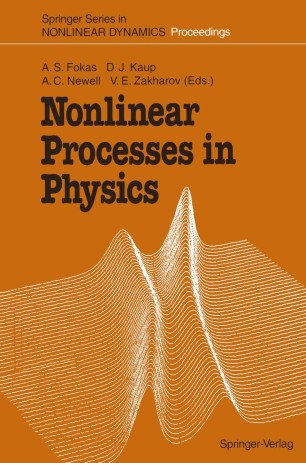 In 1979, a historical meeting took place at the Institute for Theoretical Physics in Kiev, USSR, where 48 American Scientists, specialists in nonlinear and turbulent processes, met for two weeks with their soviet counterparts. This meeting pro­ vided the unique opportunity for USA and USSR participants to directly interact personally and scientifically with each other. This interaction was of great impor­ not only for the individuals involved but also for the science of nonlinear tance phenomena in general. At the end of the meeting, it was agreed that this exchange should continue, and it was decided to have the next meeting in the USA in 1981. Unfortunately, due to the political situation at that time, the second meeting in the USA never materialized. However, in 1983, the Soviet scientists organized in Kiev a second Workshop. This second meeting was again quite successful. Similar meetings, with growing success were organized at Kiev in 1987, and 1989. It should be noted that 405 participants from 22 countries participated at the fourth Kiev workshop on Nonlinear and Turbulent Processes. The Chainnan of this workshop was V. Zakharov, who has also been a co-chainnan of all the previous workshops.