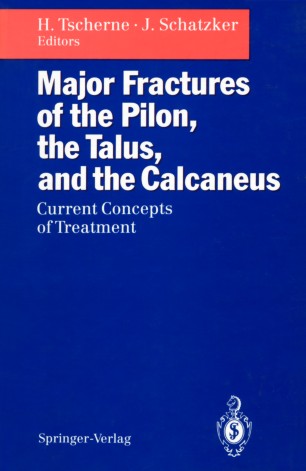 Major Fractures of the Pilon, the Talus, and the Calcaneus

This book contains the proceedings of an historic sympo­ sium, the first joint symposium of the Austrian, German and Swiss Trauma Associations and the Orthopaedic Trauma Association of North America. In an effort to bring Euro­ pean and North American trauma surgeons closer together and foster a free and productive exchange of ideas, these associations chose the meeting of the Austrian, German, and Swiss trauma associations, which was held in Vienna in May of 1991, as the occasion for their first joint session. The Austrian Trauma Association, led by its President, Professor Heinz Kuderna, was the host. The joint symposium of the European and the North American trauma associations, conducted in English, was held concurrently with the regular meeting of the AGS, conducted in German. In order to explore and compare the current concepts in trauma on the two continents, the organizing committee felt that the discussion should focus on an area full of challenge and controversy. Thus the major fractures of the pilon, the talus, and the os calcis were chosen as the topics of discus­ sion. Each subject was introduced by two keynote speakers, one from Europe and one from North America, who were chosen by their respective trauma associations on the basis of their expertise and distinguished contributions. These presentations were then followed by five or six invited shorter presentations on the subject. At the end of each session, the presenters formed a panel, debated controversial points, and answered questions from the audience.