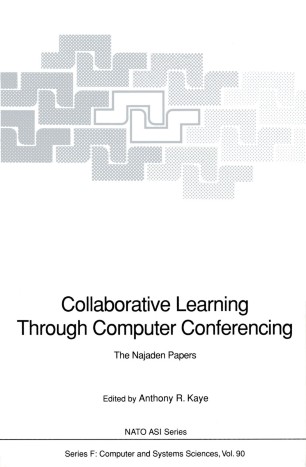 The idea for the Workshop on which this book is based arose from discussions which we had when we both attended an earlier - and more broadly based - NATO Advanced Research Workshop on Computer Supported Collaborative Learning, directed by Claire O'Malley in Maratea, Italy, in 1989. We both felt that it would be interesting to organise a second Workshop in this area, but specifically concerned with the use of computers and networking (telematics) as communication tools for collaborative learning outside the formal school setting. We were particularly interested in examining the ways in which computer conferencing can be used for collaboration and group learning in the contexts of distance education, adult learning, professional training, and organisational networking. And we wanted to ensure that we included, in the scope of the Workshop, situations in which learning is a primary, explicit goal (e.g. an online training programme) as well as situations where learning occurs as a secondary, even incidental, outcome of a collaborative activity whose explicit purpose might be different (e.g. the activities of networked product teams or task groups). Another goal was to try to bring together for a few days people with three different perspectives on the use of computer conferencing: users, researchers, and software designers. We hoped that, if we could assemble a group of people from these three different constituencies, we might, collectively, be able to make a small contribution to real progress in the field.