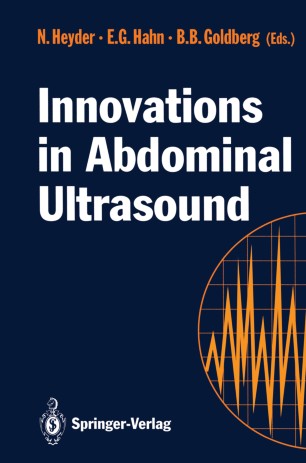 Since the beginnings of diagnostic ultrasound in the 1950s, each decade has seen significant advances in this technology. Commer­ cialization of ultrasound occurred during the 1960s with the introduction of many of the clinical uses that are in existence today. The 1970s showed the most dramatic changes with the commercial introduction of gray-scale and real-time ultrasound. In the 1980s many new advances were introduced, including color Doppler, as well as a wide variety of endoluminal approaches, including endorectal, endovaginal and transesophageal. The decade of the 1990s promises even more significant advances with further transducer miniaturization, three-dimensional ultra­ sound, and the introduction of a variety of ultrasound contrast agents. With such rapid changes occurring, it becomes important to disseminate knowledge in as rapid a fashion as possible, thus it was quite appropriate that a meeting such as this be held to provide an in-depth review of the many new areas of ultrasound imaging that show promise for the future. Emphasis was on the new uses of ultrasound in gastrointestinal diseases. Many of these advances will, of course, also have applications in many other areas of the body. It is hoped that those in attendance will acquire a much broader understanding of where ultrasound is now and where it is headed in the not too distant future.