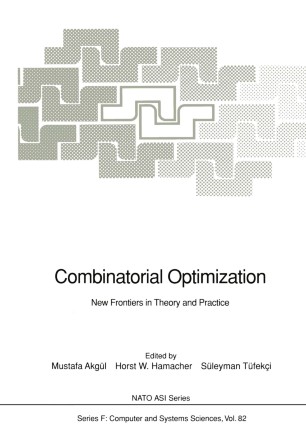 New Frontiers in Theory and Practice

There have been significant developments in the theory and practice of combinatorial optimization in the last 15 years. This progress has been evidenced by a continuously increasing number of international and local conferences, books and papers in this area. This book is also another contribution to this burgeoning area of operations research and optimization. This volume contains the contributions of the participants of the recent NATO Ad­ vanced Study Institute, New Frontiers in the Theory and Practice of Combinatorial Op­ timization, which was held at the campus of Bilkent University, in Ankara, Turkey, July 16-29, 1990. In this conference, we brought many prominent researchers and young and promising scientists together to discuss current and future trends in the theory and prac­ tice of combinatorial optimization. The Bilkent campus was an excellent environment for such an undertaking. Being outside of Ankara, the capital of Turkey, Bilkent University gave the participants a great opportunity for exchanging ideas and discussing new theories and applications without much distraction. One of the primary goals of NATO ASIs is to bring together a group of scientists and research scientists primarily from the NATO countries for the dissemination of ad­ vanced scientific knowledge and the promotion of international contacts among scientists. We believe that we accomplished this mission very successfully by bringing together 15 prominent lecturers and 45 promising young scientists from 12 countries, in a university environment for 14 days of intense lectures, presentations and discussions.