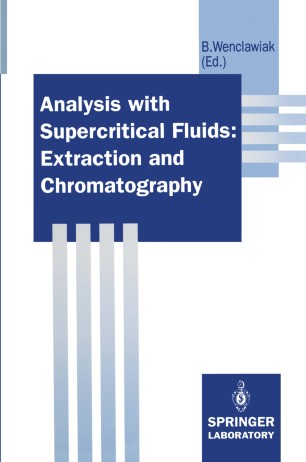 The use of supercritical fluids in analytical chemistry is still grow­ ing. More and more analysts are discovering the favorable advan­ tages for a number of applications. Especially supercritical fluid extraction (SFE) has attracted a lot of interest in recent years due to its simplicity. Supercritical fluid chromatography (SFC) has become better established and the development of this technique has been accelerated by the many applications with capillary col­ umns which have been published in the literature. At first SFC equipment was based on instruments commonly used for liquid chromatography, and the first commercial in­ struments were derived from this technology. However, capillary columns can be much more easily interfaced to gas chromatogra­ phy equipment especially to the detectors commonly used for Oc. Many stationary phases both for packed micro columns and capillary columns have been designed for SFC purposes extending this technology to LC and OC. The most common fluid applied in SFC and SFE is carbon dioxide. The advantages of supercritical CO , such as having dif­ 2 fusivity like a gas and solvating power depending on temperature and pressure, are also valid for other fluids and modified fluids. Both properties are valuable for sample extraction and extraction selectivity.