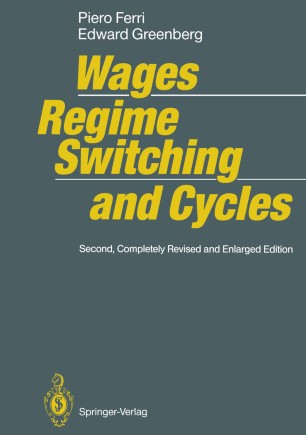 The initial purposes of this book were to update and extend the discussion and the results presented ill our previous book, The Labor Market and Business Cycle Theories. Our 1990 article, which appeared in The Journal of Economic Behavior and Organization, represented a first step in this direction. The consequences of this effort have materialized in a number of new chapters that has led de facto to a new book, in which the surviving parts have been largely revised. The 1989 book was too mathematically oriented for many Keynesians and post­ Keynesians to be fully appreciated and insufficiently microfounded for both new­ classicals and new-Keynesians to be warmly accepted, yet we received positive and encouraging comments, and it was sold out very quickly. It was an attempt to dis­ cuss dynamics in Keynesian terms, based on a double assumption that maintains its validity-that both economic facts and analytical and methodological innova­ tions had contributed to a renewed interest in business cycles, which over time has had its "ups and downs." Since then, many more articles and books have appeared, stressing in particular the role of microfoundations and of nonlinearities in shaping business cycle theory.