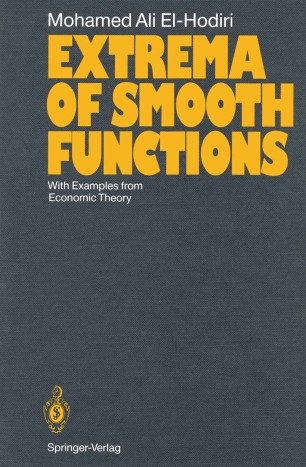 With Examples from Economic Theory

It is not an exaggeration to state that most problems dealt with in economic theory can be formulated as problems in optimization theory. This holds true for the paradigm of "behavioral" optimization in the pursuit of individual self interests and societally efficient resource allocation, as well as for equilibrium paradigms where existence and stability problems in dynamics can often be stated as "potential" problems in optimization. For this reason, books in mathematical economics and in mathematics for economists devote considerable attention to optimization theory. However, with very few exceptions, the reader who is interested in further study is left with the impression that there is no further place to go to and that what is in these second hand sources is all these is available as far as the subject of optimization theory is concerned. On the other hand the main results from mathematics are often carelessly stated or, more often than not, they do not get to be formally stated at all. Furthermore, it should be well understood that economic theory in general and, mathematical economics in particular, must be classified as special types of applied mathematics or, more precisely, of motivated mathematics since tools of mathematical analysis are used to prove theorems in an economics context in the manner in which probability theory may be classified. Hence, rigor and correct scholarship are of utmost importance and can not be subject to compromise.