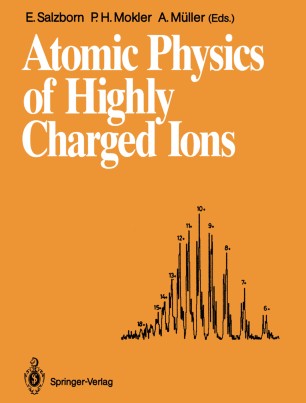 This book contains the invited lectures and contributed papers presented at the V International Conference on the Physics of Highly Charged Ions, which was held at the lustus-Liebig-Universi­ tat Giessen, 10-14 September 1990. This conference was the ftfth in a series -after Stockholm (1982), Oxford (1984), Groningen (1986) and Grenoble (1988) -to deal with a rapidly growing fteld, which comprises the spectroscopy of highly charged ions and their interactions with photons, electrons, atoms, ions, and solids. Most of the matter of the universe is in the ionized state. Investigations dealing with hot plasmas on earth have been greatly furthered by thermonuclear-fusion research. The increasing maturity of this programme has revealed the fundamental role of highly charged ions in fusion plasmas. Today, it is clear that a detailed knowledge of the production mechanisms of highly charged ions and their interactions with other plasma constituents is an important prerequisite for a better understanding of the microscopic and macroscopic plasma properties. The study of highly charged ions involves various branches of physics. It was the aim of the conference to bring together physicists working in atomic collisions and spectroscopy, in plasma physics and astrophysics, as well as in solid-state and ion-source physics. About 220 scientists from 20 nations attended the conference, indicating the strong worldwide interest and the vital­ ity of research in this fteld.