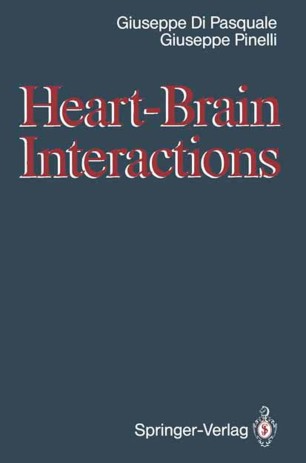 In the last decade there has been a growing interest in the study of the interactions between the heart and the brain, especially in the field of cerebral ischemia. The interactions between cardiovascular and cerebrovascular diseases are of relevance not only for research investigation, but also for clinical implications in the daily clinical practice. i.e. A wealth of information has been gathered particularly on three topics, cardiovascular consequences of cerebral injuries, cardioembolic stroke, and association of carotid and coronary artery disease. The available information, however, is still sparse and fragmentary mainly because of the lack of commun­ ication between neurologists and cardiologists. With the aim of improving communication between several disciplines and technologies, we started to organize since 1987 in Bologna, Italy, an international Symposium on heart­ brain interactions to be held every 3 years. Our intention was to gather prominent clinicians and researchers from outstanding cardiologic and neuro­ logic institutions actively involved in the study of heart-brain interactions. The ambitious goal has been to fit different pieces of information like in a puzzle. This book originates from the contributions presented at the 2nd Sympo­ sium which was held in Bologna on November 30-December 1, 1990. The book is subdivided into three sections: I cardiovascular consequences of cerebral damage, II cardiogenic cerebral ischemia, III cerebrovascular and coronary artery disease.