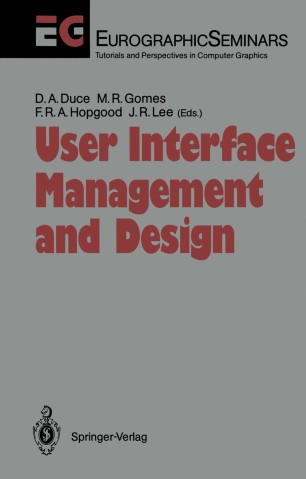 This volume is a record of the Workshop on User Interface Management Systems and Environments held at INESC, Lisbon, Portugal, between 4 and 6 June 1990. The main impetus for the workshop came from the Graphics and Interaction in ESPRIT Technical Interest Group of the European Community ESPRIT Programme. The Graphics and Interac­ tion in ESPRIT Technical Interest Group arose from a meeting of researchers held in Brussels in May 1988, which identified a number of technical areas of common interest across a significant number of ESPRIT I and ESPRIT II projects. It was recognized that there was a need to share information on such activities between projects, to disseminate results from the projects to the world at large, and for projects to be aware of related activities elsewhere in the world. The need for a Technical Interest Group was confirmed at a meeting held during ESPRIT Technical Week in November 1989, attended by over 50 representatives from ESPRIT projects and the Commission of the European Communities. Information exchange sessions were organized during the EUROGRAPHICS '89 confer­ ence, with the intention of disseminating information from ESPRIT projects to the wider research and development community, both in Europe and beyond.